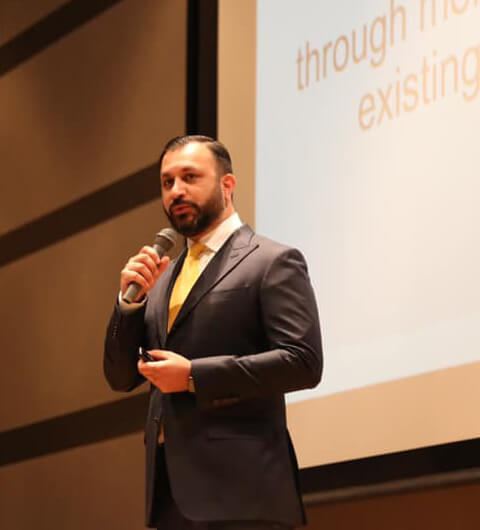 “Life comes by experience, everything else is just existing!” – This is a motto that has guided Mao Lal for over 17 years as an entrepreneur and investor. Mao Lal has consciously paid attention to a high diversification in his projects and acted consequently. Meanwhile, he can refer to a large number of companies and investments in different branches of industry.

After his military career with a focus on operations, project management and leadership, the acquisition of the officer’s certificate (diploma) as well as the qualification as a business economist, Mao Lal laid the foundation for his present success in 2003 with the trading of precious metals.As owner and managing director of the German Precious Metals House and with the publication of specialist literature on the subject of gold, Mao Lal has established himself as a sought-after expert in the field of precious metals.

With his distinctive sense for innovation, Mao Lal is also one of the most successful entrepreneurs in the field of blockchain technology. He recognized the potential of this revolutionary technology early on. The current focus is on the digitalization of asset classes. Own blockchain/ STO projects are on the international market or in different stages of development. The project Coinygram – the own exchange platform – was recently launched.

With Bitson Management GmbH, Mao Lal develops and promotes blockchain projects and the digitalization of enterprises for customers. Target-oriented, he brings along his experience in project development, a worldwide network and an international sales structure, as well as the unrestrained spirit to bring further projects to the strongly growing market.

This website uses cookies to improve your experience while you navigate through the website. Out of these cookies, the cookies that are categorized as necessary are stored on your browser as they are essential for the working of basic functionalities of the website. We also use third-party cookies that help us analyze and understand how you use this website. These cookies will be stored in your browser only with your consent. You also have the option to opt-out of these cookies. But opting out of some of these cookies may have an effect on your browsing experience.
Necessary immer aktiv
Necessary cookies are absolutely essential for the website to function properly. This category only includes cookies that ensures basic functionalities and security features of the website. These cookies do not store any personal information.
Non-necessary
Any cookies that may not be particularly necessary for the website to function and is used specifically to collect user personal data via analytics, ads, other embedded contents are termed as non-necessary cookies. It is mandatory to procure user consent prior to running these cookies on your website.
SPEICHERN & AKZEPTIEREN